Lunaception ~ Conceiving by the Light of the Moon

Lunaception is the practice of aligning your cycle to that of the moon, which is believed to increase your chances of conceiving. Women's cycles have long been believed to be intrinsically connected to the waxing and waning of the moon.

The term Lunaception was coined by Louise Lacey over 35 years ago when she first published a book by the same name. It fell out of print over the years and after receiving numerous inquiries, she regained the rights to the material and now offers Lunaception as an e-book.

As she explains, "The basic theory of Lunaception is that our bodies evolved to respond to the light and dark of the moon's rhythms, menstruating at the new moon and ovulating at the full. To reproduce that rhythm in western civilization, we must shut out all light while sleeping except in mid-month, when we add a small night light to reproduce the effects of the full moon. What often happens is that your body will get in tune with the actual moon's cycles, and at that point you can simply throw open your drape. Either way, your body gains a higher level of reproductive function."

To do this, you need to sleep in absolute darkness every night, except for the three nights surrounding the full moon. These nights, leave a small light on in your bedroom. According to the theory, after 3-6 months your ovulation cycle should synchronize with that of the full moon, and your chance of conception is believed to be higher as you are in tune with the moon.

Does it work? Well, for the past three cycles I have managed to be almost completely in tune with the moon. I'm now bleeding around the new moon and ovulating just around the full moon, which this month is on August 24th. Remember that the tides are controlled by the moon, so is it really far-fetched for our cycles to be affected by the moon, too? Of course we're influenced by many other factors as well, but at the very least, it could be fun to try!

In that spirit, I have designed the Lunaception Fertility Bracelet... It has dark purple amethysts which are thought to promote fertility and prevent miscarriage. The rainbow moonstones are for the waxing & waning of the moon - this stone is considered to be the women's stone and is believed to assist with conception, pregnancy and birth. A coin-shaped freshwater pearl represents the full moon and new beginnings. And a tiny goddess hangs from the sterling silver clasp. Silver is sacred to women, and repels negativity and enhances positive energy - especially during the full moon...

So, if you're trying to conceive, consider giving Lunaception a go and if you do, let me know how it worked for you.

Fertility Affirmation: "I am in tune with the moon, and will conceive soon!"

My milk is liquid love and my baby thrives on it!

Nourish is such a sweet sounding word... and you nourish your baby on so many levels when you're nursing. Your baby is cuddled and feels your love surrounding her, safe and warm. Her physical body gains much needed fats and anti-bodies. The milk quenches her hunger and her thirst. Looking up at you and all around nourishes her mind - she's learning every minute! And one of the most important things she's learning is just how wonderful life can be here in your arms, away from the rest of the world with just you and your liquid love...

Do you dream of a baby to hold in your arms? This might be the right fertility bracelet for you...

It features lots of sterling silver, hand-cut purple amethysts, rose quartz and light green aventurine - all natural gemstones which are believed to enhance and sustain fertility. It's finished with a simple, sterling silver toggle. All of these bracelets are made with sterling silver - it lasts, is beautiful, contains no lead or harmful substances, repels negative energy and is sacred to women. 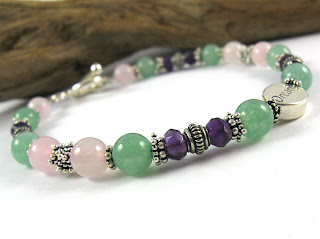 More Affirmation Fertility Bracelets will start appearing in the shop soon, including: Hope, Bless and Goddess... Can you think of more you'd like to see?